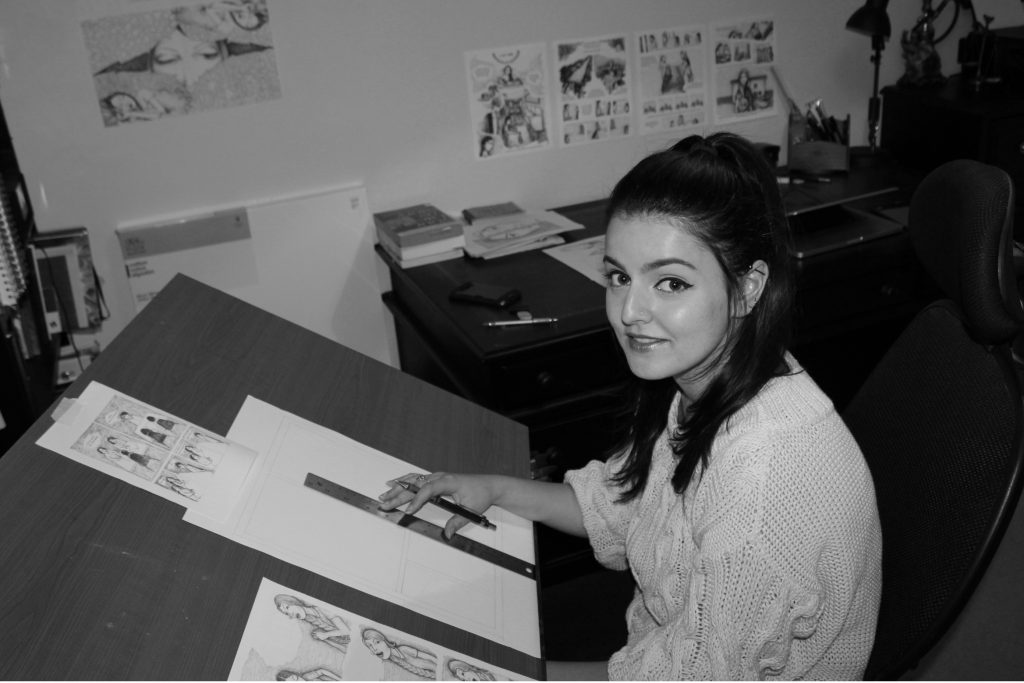 Sayra Begum released her first graphic novel, Mongrel in August 2020, published by Knockabout Comics and supported by Arts Council England. Mongrel tells the story of a British Muslim woman who grew up in-between two cultures. The protagonist, Shuna, challenges conventions, looking beneath the surface to celebrate differences and reveal our common humanity.

Begum’s style is influenced by Islamic miniatures and Surrealism. She is interested in theology, our relationship to the environment, to each other, and the reality that exists beyond our perception. Her primary tools are mechanical pencils, but she is experimenting with developing her technique in other mediums. She is currently scripting her next graphic novel, a story based on her grandparents and their encounter with a Djinn. She is due to take part in the Comics Cultural Exchange Residency in Prague this year.

Begum studied BA Illustration at Plymouth College of Art (2014) where she discovered graphic novels in the university’s library. It was Craig Thompson’s Blankets and Marjane Satrapi’s Persepolis that had a significant influence on her. On the MA Illustration course at Falmouth University (2016), she decided to focus on graphic memoirs, particularly memoirs belonging to female and marginalised voices. Her journey with Mongrel began there and was at the centre of her creative practice until its completion in 2020. She is now training to become a lecturer, studying for a PGCHE whilst tutoring on the MA Illustration course at Falmouth University.

2012 – Collaboration with Razwan Ul-Haq on illustrations for Sultan Vs. Dracula

bookmunch.wordpress.com, “we applaud it” – Mongrel by Sayra Begum